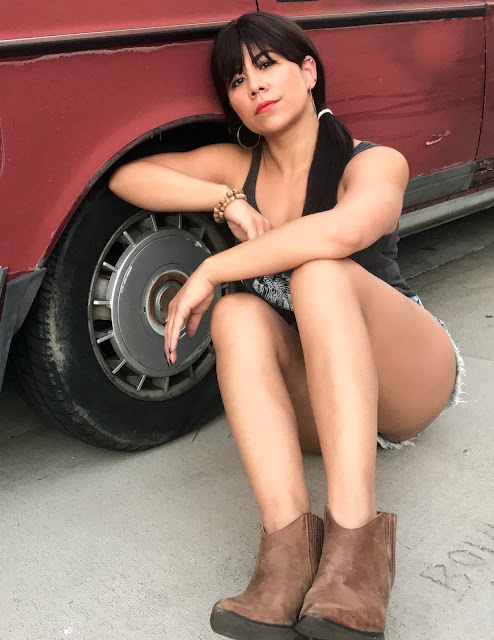 Spotting her first at the INSTANCE film premiere, an indie film written, directed, and starring the extraordinaire Teria Birlon, I struck up a conversation with Actress Santana Dempsey. I had a feeling there was more to meet the eye with her and I was entirely right. With many cultural influences Santana's uniqueness is beneficial not only in her adding a different texture to her characters but also how she chooses her roles. Now what makes Santana original? Well you'll just have to keep reading won't you.


1. Tell us what you knew about the show "Dear White People" before you booked the show. Any trepidation upon taking that role? And how was it on set?

I saw the movie first and became obsessed immediately.  Anytime I see mixed race people onscreen, especially as leading roles I am tuned in and connected. I simply didn't grow up with seeing people that looked like me onscreen.

Absolutely no trepidation at all on working on the show. I actually went after the show. Meaning, I knew it was a show I wanted to be on so I did everything I could to be seen. I knew Stephanie Allain Bray one of the executive producers who actually played my mom in the movie French Dirty. I reached out to her for another role that they saw me for but I wasn't quite what the director Justin Simien had in mind. Then when Jenny came along, the campus feminist it was all me. (lol).

Filming was great. Everyone was so nice. I got to work with Tina Mabry who is this fierce African American director. It was my first time in Hollywood working with a female director. Which is actually pretty sad. We need more female directors. Tina was so nice and made me feel really seen. She is someone I am eager to continue to work with. All of them are!
2. You mentioned being adopted, how has that help shape your worldview and how you approach acting? What has been the most rewarding part of being an advocate of adoption awareness?

That is an interesting question. In terms of worldview, it has helped me realize that everyone simply wants to belong. Everyone is worthy of being loved no matter where you come from. I feel like that sounds cheesy or generic but I mean those words.  People who are adopted have a lifelong journey of coming to terms with the fact that their biological parents couldn't care for them. In many, many different capacities of not being able to take care of a child. At the core, most adoptees, myself included feel abandoned. We struggle with this. Even if our parents who adopted us are amazing, there is this tiny part that feels left. Honestly, one reason I started acting was to be seen. To be validated. Which is ironic because it is the one place where I receive the most rejection and criticism. Maybe in a backwards way, it is the reason I act. To prove the system wrong. That I too can belong when odds are stacked against me. I do belong!

The most rewarding part about adoption awareness is meeting so many other adoptees. It's really beautiful to exchange our stories and go "oh, you feel that too?" It's like I have this secret community. A community that completely gets my experience. Adoption is still pretty taboo and not fully understood that being able to talk about it honestly in public to help others understand the realities of adoption brings me great joy. 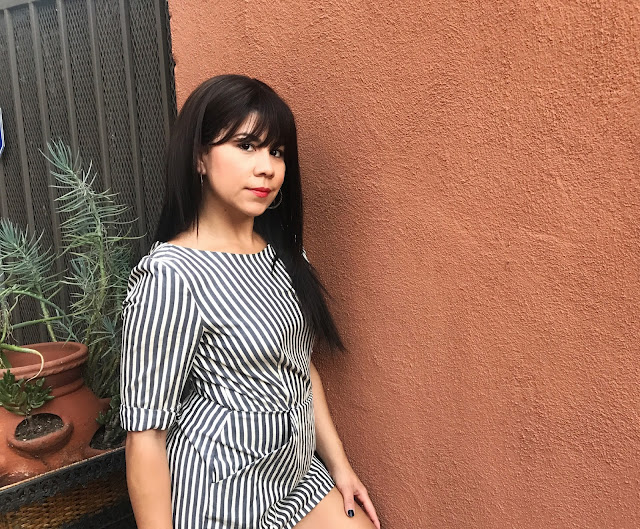 3. How do you embrace your Afro-Latino heritage? How do both heritages play a role in your acting and choosing roles?

I am actually afro-latina and white.  My biological mother was a caucasian woman from Texas and my birth father from what I was told was from Puerto Rico. He was a mix himself.

Embracing my roots has been a daily journey. Society almost forces me to reject parts of myself to please others that don't understand but I choose not to. I have West African blood. Spanish blood. Taino blood.  French blood. English blood. Irish blood. Italian blood, all running through my veins. They are a part of me and I choose to accept them all. I get to be whomever I want to be. I can highlight a different part of me every day without rejecting the others. That's pretty powerful.

Truth, being mixed in the entertainment world, primarily as an actor has a lot of challenges. I am never enough it seems. Black enough. Latina enough. White enough. Seriously. For network, I get so excited if a biracial or mixed race role I fit comes around. (It's very rare) When it does, I am hardly seen. It's insane. Things I've learned are: Biracial means light skinned black or black with curly hair and/or light eyes.  Mixed race or ambiguous means a white person with dark hair and maybe they have some Italian in them (haha).... It is not fully representative of what being mixed race is. I have to laugh about it now so I don't cry.  It's almost like the industry still doesn't know what to do with us who don't fit into their categories that they created. It is better than it was 10 years ago but not that much!  So many roles are based on stereotypes, stereotypes I don't really fit.  Especially when it comes to Latina roles.  Meaning, I don't have a Spanish accent. Nor do I speak speak Spanish fluently.  Which is about 50% of the roles. Because you know, you can't be Latino or Latinx without speaking Spanish (eye roll).  Plus, apparently I'm what they call a "dark skinned Latina". I found that out from another "light skinned" Latina actress in NYC. She schooled me. Actually felt more like her Latina lightness was better than my Latina darkness but I kept quiet to learn. Though, this is basically how a lot of the casting goes. It's like producers are afraid to showcase more indigenous or Afro Latino features for fear that middle American and the South won't tune in.  It is total crap. They would tune in if they cast outside of their comfort zone. Or went to different parts of Mexico like Oaxaca, Veracruz, Guerrero where many Black Mexicans live to open their eyes more on how varied Mexican people look.  Or go to Dominican Republic, Puerto Rico, Panama to see all the beautiful mixes. Not everyone needs to look like Sofia Vergara to play Latina.

I have endless stories on this topic . Ones that break my heart because of peoples ignorance. There is much discrimination in my field from everyone. Even people of color.  AlI can do is stand up for myself. Be a voice. Educate others when I see appropriate and keep creating my own stories and mixing into everyone else's. No matter what happens, I know who I am.

4. Tell us about your recent short story that you've published?

My short story "An Impossible Feat" is published in an anthology called "The Beiging of America".  The book is a collection of personal narratives written by mixed race people. It was my first time writing a short story.  The structure proved a little challenging for me but I did it! I have a tendency to be wordy as you can see. (hahaha).  The story is about my sister and me being taken away from our biological parents and put into a foster home for three years.  It explores how for me being abandoned by my birth mother (she ended up taking her own life) made me have this idea that if someone loved me, they would leave me. It seemed like all the people around me in the first six years of my life who were suppose to love me and want me --- wouldn't stay.  It is what I like to call, backwards love. The story follows me in foster care trying to understand why I was treated differently than they other White kids. At that time, all I knew was that my hair and skin are what set me apart. I was taught that these features weren't as good as the White foster kids. See, I'm talking to much again. I'm going to stop because I don't want to give too much away! I'd love for you all to read it. You can buy it on Amazon!


5. Tell us about your role in Low Life? How was it like to take on such a role ? Emotionally & mentally how did you prepare?

I play Kaylee. An eighth month pregnant heroin addict who was sold into sex trafficking when she was younger but later saved by a washed up Luchador named El  Monstruo who becomes her husband. Pretty much everything is stacked up against Kaylee from the beginning of the movie. Throughout the entire film she is fighting to escape being kidnapped and having her organs sold. Pretty brutal stuff.

Taking on the role of Kaylee was really fun. I mean, it was a more physically challenging role but I love a challenge. Wearing a pregnancy belly was pretty different and being made up to look like I was strung out was nuts. I hardly recognized myself most days. I end up having the baby in the film and I remember asking my sister and like two other friends what going into labor was like because I had zero experience having a kid. I wanted to know what it was really like to birth a child. Wow. I am just remembering so much. The makeup artist had to make this afterbirth for me made out of applesauce and red food coloring and put it all over my thighs. Then we actually had a real baby boy as my son. He is my friends son and was such a trooper. It was all so magical and intense. Now that I think about it all, this may be one of the best acting experiences of my life thus far.

Everything happened so fast I feel like I didn't get a chance to prepare. At times I felt like I just dove in. Splashed around a little and tried to figure out how to swim. Though, as I mentioned I did prepare by asking a lot of question I didn't know regarding being in labor. Plus, the director Ryan Prows always talked with me about every scene and made sure I understood his vision. That helped a lot.  I did do a lot of research on addicts. I also used a lot of my own past trauma and adoption experience for the role. My character is adopted too. Which helped me really understand her better because I already know what it feels like to be abandoned. I imagined Kaylee felt very similarly and turned to drugs to help escape but also she knew no other lifestyle nor had the resources to help her make better choices. Unlike I did. At times, I would find myself becoming emotional when I'd finish shooting. It was so close to home for me but also so very different. I am really proud of this role and I can't wait for you all to watch the movie. It is unlike anything I have ever seen. We have our USA premiere next week in Chicago at the Music Box Theatre on Nov. 4th, 9;45pm!