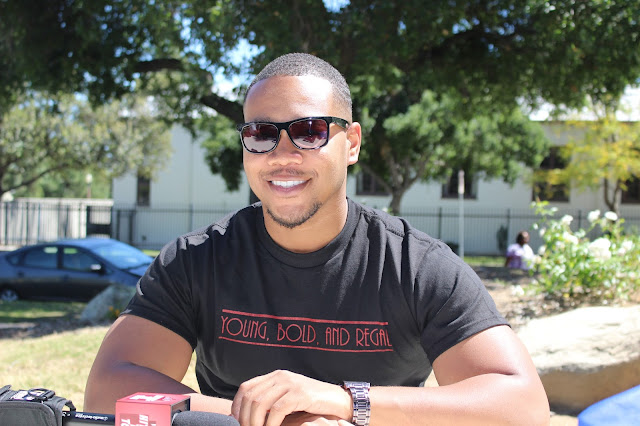 Photo by Evan Jackson
by Evan Jackson
If the world really is a stage and we are all merely players in it with our entrances and exits, as Shakespeare suggests, then actor, host, and executive producer Tony Towns has made one hell of a debut. Working in the corporate aspect of the entertainment world, having countless jobs on FreeForm's Baby Daddy, Tony Towns hungered for more. With that passion he co-created, with Jesus Heredia, the interactive show Hitting The Town - where he's the executive producer and host. With his infectious energy he joyfully engages celebrities, the everyday man on the street, and guests at red carpet events. When I looked at his work and met him I knew he would thrive in any setting you put him in. Where will we see Tony next? Hosting the next Miss Universe Competition? Talking to the stars as they arrive for the Oscars? With his charisma, stage presence, and never-ending work ethic you'll soon see him everywhere.

Tony Towns on the Creation of Hitting The Town

Tony Towns on Boldest Thing He's Done In His Career

Tony Towns on The Boldest Thing He Will Do This Year