Krystle Rich is the host and producer of Time Warner Cable Community’s original show "Get Fit" in Los Angeles, California. As a writer, producer, editor, and on air- talent Rich has built an impressive sports journalism career. She was the creator of the video production department for Philly Sports Pulse, worked at ESPN, and currently serves as a producer for the NFL.com Around The League Podcast. Her athletic background and go getter mindset has earned her the nickname the “Hustler”.  Tune into Get Fit to see Krystle Rich interview athletes and report on the latest trends in health and fitness.

How did your love for sports come about?

Growing up it was always church, home, & football. I grew up with brothers who played sports. My grandfather Ira Rich was the first inspirational black basketball player at Lower Merion High School. Family legend has it that Kobe Bryant found inspiration in my grandfather’s story. That combination of my family involved in sports and me being athletic set a good foundation.

What is your favorite sports memory growing up?

My dad loves telling this story! In middle school, I was on a basketball team where I was not good on offense and mainly in there for defense. I had gotten fouled and had to step to the line to shoot free throws. The crowd knew that I wasn’t particularly good at shooting the basketball, but they still encouraged me. I missed the first one, which is what the crowd expected. Right before I shot for the second time, I closed my eyes and said, “I can do all things through Christ”. I made it!

What are your favorite sports teams?

Everything Philadelphia. Phillies when it comes to baseball, The Eagles, 76ers, the Philadelphia Flyers, and Philadelphia Union. My friends from New York always have a debate about who is going to win when our teams play each other.

Why do they call you the “Hustler”?

It goes back to bible study when I was younger and I learned the concept of paying tithes. I wanted to raise money, but my dad didn’t want me to outside the house considering I was still very young, so he said pray about it. I was the kid in middle school selling candy and making $40/$50 a day. However, it all started in Dad’s take your daughter to work day. While my dad was in a big meeting, I asked a secretary to make a bunch of copies for the colored sign which said Combs (spelled with a “K” – Koms”) for $2. I put the flyer on all of my dad’s co-workers desk and by the end of the day everyone was buying my combs and giving me $2. I bought a big container of about $50 for only a few dollars. My dad must have thought it was “daughters work at dad’s job day.” All the money I made all year was ONLY to pay my tithes, buy birthday and Christmas gifts for my family and neighbors. Ever since I was little I always found a way to have a business. That working hard mentality has transferred over to my career.

How have your experiences at Ru-TV Network at Rutgers University aid you through your career and life in general?

It was phenomenal. Ru-TV set a foundation for my career. Before you appeared on air you would have to learn everything about studios, writing, producing, editing, pre-scripts, how to pitch different stories, and much more.  It was the best hands on experience to get your feet wet. We had to learn all aspects of production before we could produce or be on-air. I cannot tell you how valuable those skills were and still are to me. I started out in Master Control, where you control the schedules for all the programming on our channels. Master Control is the technical side of television.

Through your career what has been the most memorable piece you’ve edited, written or produced?

My most memorable piece at Rutgers was on Eric LeGrand’s story.  I composed a package for RU-TV to help raise money for his medical bills after his injury.

I helped create video content for a sports website. I created the video department and was the coordinating video-content produce for a Philadelphia sports website. There I was a one-woman-band. I was the producer, reporter, camera person and editor.

At NFL.com I produced for NFL Around the League Podcast.  It was different and new to me, but it was rewarding because I put in a lot of hard work. Initially it was a small segment at the tail end of a different podcast now it has grown and branched off into its own full length podcast. The podcast went on to be named iTunes “Best of” 2013 & Stitcher’s Best Sports Commentary of 2013.

For Time Warner Cable I interviewed Richard Sherman and was a correspondent at this year’s ESPYs.

As writer, producer, editor, and on- air host how do you delegate which responsibilities come first?

It's a lot of work. I consider everything important. It is time consuming yet rewarding. To manage it all you have to patient and diligent.

Why do think it’s important to have a good representation of women in sports journalism?

Sports journalism is a male dominated profession. And based on that fact, it doesn’t mean women don’t know the ins and outs. One person I’m inspired by is Jemele Hill, who doesn’t only host or report but also is an analyst and a columnist. It’s good to see women represented well.

As the host of Time Warner Cable Community’s “Get Fit"  you do a lot of activities that help get people in shape: Such as Salsa & belly dancing. What was the most fun activity you have done for the show thus far?

I went to Cirque School LA and it was quite the experience hanging upside down on a trapeze. I’m also looking forward to surfing in an upcoming episode of Get Fit as well.

What have been some of your favorite events that you have covered as a journalist & which events are you looking forward to cover?

At Rutgers I reported on the Women’s Basketball team when they went to Madison Square Garden in New York.  Another one of my favorite events I covered was when The Philly Union soccer team faced off against the soccer club team Real Madrid.

Which activities did you do when you were younger that you still do to this day?

How do you personally stay in shape?

Being the host of “Get Fit” helps me stay in shape. I also have a LA fitness membership.

I noticed your faith is an essential part of your life. How has it helped you in the decisions you’ve made along your journey?

My faith is a huge part of my life! I never take credit for anything; I give all credit to God. I trust him with every decision.

What are your aspirations going forward?

I definitely want to do more sports reporting and continue producing sports show. I would like to write books with a message. I also want to do ministry.

People can reach me at my website, krystlerich.com
And also take a look at Get Fit on ch. 354 every day at 1pm and 11pm. We have new episodes every other Monday. Time Warner Cable Community ch. 354.
You can follow on twitter: @GetFitTWC, @krystlerich
Facebook: Get Fit TWC 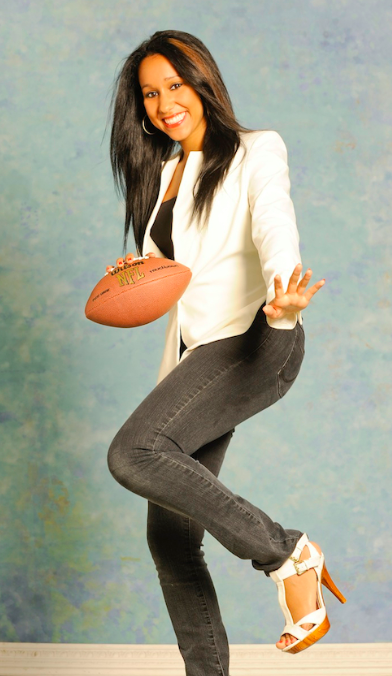