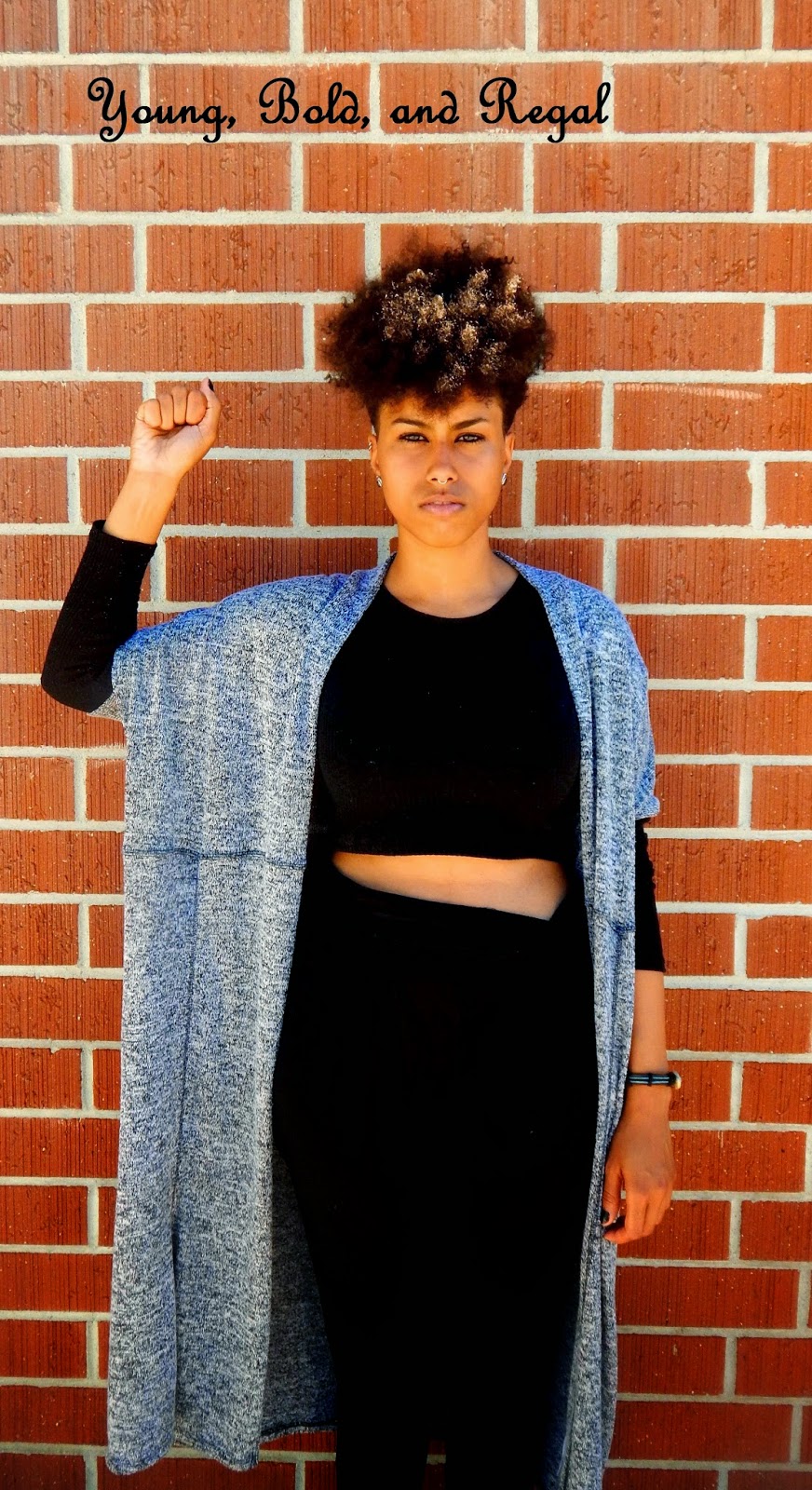 Nyehla Irsheid is a determined full-time student and Vice President of the Black Student Union at California State University, Los Angeles. When I first met Nyehla she emphasizes to me that she sees the bigger picture and shies away from attention. She has that happy warrior mentality – easy going on the surface, but in an instant will fight for a cause she believes in. She has the heart of a revolutionist and a compassionate nature about her. The most telling part of meeting Nyehla was when I asked about her future. She choose to look within saying she wanted to focus on self-reflection. As if she will bring the gems of knowledge she discovers in herself to the world when the time is right. With the will to change the world for the better and the revolutionary heart to carry her through Nyehla will continue to be a leader. If, no no I mean when the revolution happens we’ll all be in good hands with Nyehla by our side.

What is your story?
I’m the youngest of three and I was born in California. We moved around a lot from San Bernadino in California to Las Vegas to back to California in Moreno Valley. My mother is a single parent and I’ve never met my father. I feel that plays a role and that is why I’m so independent on my own. I like that feeling and it’s a liberating feeling for myself and to see my mom do it is inspiring. I never considered college; no one in my household had gone to college including my mother. Not until my junior year of high school did I consider it because we had a program on campus that brought it to my attention that it doesn’t matter if you have enough funds to go to college because there are financial aid packets that help you go through it. I got accepted to California State University,Los Angeles and moved out to LA on my own.

How did you become involved in activities and organizations on the Cal State LA campus?
I wasn’t fully involved with activities on campus because I was a part-time student and part-time worker. I had focused more on work so my grades had become affected because of that.  Not until my junior year at Cal State LA did I focus purely on school, taking more units, and getting involved on campus. I was in search of the Black Student Union and I found out that it was inactive. I took it upon myself to appoint myself as president. I found some board members who could help grow BSU and who had visions to see Black students come together for a good cause.  With the board members along with myself BSU became active again. Currently I’m a full time student and reappointed myself as Vice President of BSU because I did not feel I was ready for the role as president just yet. My major is Health Science and most recently I majored in Pan African Studies.

Would you call yourself an activist?
Yes, I do it because I should and I do it because I want to. I’m frustrated sometimes with seeing people on our campus that aren’t as active as I would like them to be. Then I consider the demographics and how Cal State LA is a first generation school and people are not only part time students but part time workers. They have to sustain their own income and I acknowledge that factor. I appreciate activists in the past like Malcom X and Ella Baker with their approach to it showing you don’t have to do it one way. Recently I went to Millions March LA and I was so inspired to see Black and brown bodies come together. The focus was on the police brutality of blacks across the country.

What influenced you to go to Millions March LA?
I wanted to show my support and I take into consideration that numbers do matter. When people see a big turnout, it sparks an interest. Unfortunately, sometimes people need to see a big turnout to support a cause. We marched for Michael Brown, Travyon Martin, Eric Garner, Tamir Rice, and all those black bodies that died unarmed by the hands of white police officials and the justice that was not served on their behalf of their families. I wanted to go to Millions March LA because of my compassion for those families and my pride in who we are as black people and coming together. I feel that we are all leaders. Like the Ella Baker quote “Strong people don’t need strong leaders”. I also feel she doesn’t get enough credit when it comes to the Civil Rights movement and the advances that were made. For us to come out, I feel like we were setting an example and I feel like the fight isn’t over.  The march was a good start to say that we are here, we matter, and we have a long way to go. When Martin Luther King Jr. did his speech, we celebrated a 100 years too soon definitely. We need to continue the fight.

As a Black culture, where do you think we go next  in terms of areas we need to improve in, not only currently but Black culture’s place in society fifty years from now?
It’s definitely about self-reflection. You can’t ask without knowing what you are asking for and a lot of people do that. I feel like we need to raise the consciousness of not just Black Americans, although we do need to know where we come from. Over the past two quarters I’ve felt empowered to learn about what black people have done in the past. It’s about raising consciousness in the black community, in the brown community, and especially in the white community. If they don’t have compassion or knowledge about it, then we can’t take the next step. However, I realized sometimes we have to act before we raise consciousness because that’s what’s going to get the people moving. Maybe they’ll get more involved in it when they know why we are creating awareness. You have to take what you know and what you’ve learned in the past and move forward. Speaking on a micro level, I’m one individual and it has to start in small ways, then it becomes a movement on a macro level. Like with Civil Rights it was the SNCC, the SCLC, leaders, and communities that pushed it forward. So to start small with BSU on campus what we can do is come together with other BSU organizations like USC, Cal State Northridge, Cal State Long Beach to create workshops, similar to what SNCC did, and go into communities. We can create a lesson plan, we did from each major and bring something to the community especially on Black history. You need to know where you came from to where to go. Each organization would go out each quarter or once a month and hold workshops engaging the community. We’re conditioning leaders so that when we leave it continues and even when we leave we still have work to do. We’re yearning for a leader because we don’t see ourselves as leaders.

What is the boldest thing you’ve ever done?
Sophomore year of college, I didn’t see too many familiar faces living away from home and my grades began suffering. I had focused even more attention on work. I ended up quitting my job, dropping my classes, and moving back home for the summer. When it was the end of summer I had no home back in LA and I had no job. I went with my instincts, and often that seems to work out for me. It seemed that the odds were against me, but I proceeded and decided to come back to LA and stayed with a friend. Within a week I got a job and then the dorms called me to inform me that they had a vacant room available that I may live in. By fall quarter of my junior year I was enrolled in classes at Cal State LA once again with a place to stay and a job.

What is the most empowering thing you’ve done?
I would say cutting my hair. I felt empowered afterward, although it was an awkward stage of going through that insecurity. I’ve heard once someone say when you liberate yourself you liberate others. I noticed three or four friends in my circle had cut their hair a year later. It was a good feeling and I learned to embrace other aspects of myself.

What are your future aspirations?
Besides worldly things I would like to get to know myself more. I’m all about soul searching and remembering who you are. In the future, I just to be more confident and more self-reliant. I want to familiarize myself with who I am before I worry about anything else. You need a strong foundation and I believe getting to know yourself is getting to know others.  How I say I want to affect and change other people’s life I have to start with myself. The more you liberate yourself you liberate others and the more confident others will be.

Where can people reach me?
People can reach me at irsheidnyehla@gmail.com