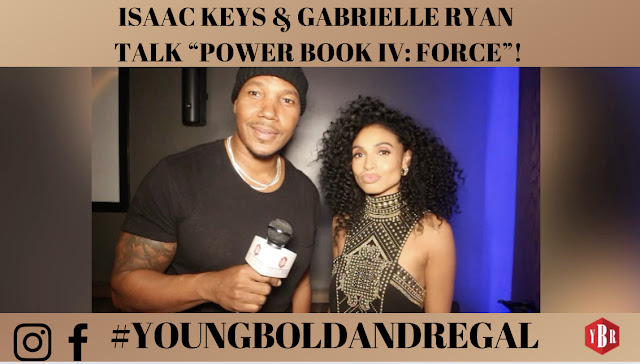 by Evan L. Jackson
At the Power Book IV: Force screening at 3rd Base LA in Los Angeles our Young Bold And Regal contributor Danika Edwards spoke with two stars of the show Isaac Keys and Gabrielle Ryan. You can tell the excitement at the premiere of the show was going to appear on the mini movie screen. The back area of 3rd base LA, essentially a cross between a lounge area and a mini theater, turned into a VIP section when the boss of all bosses 50 Cent walked in. %0 Cent executive produces Force along with other shows connected to the tv universe at large including: Power, Power Book II: Ghost, and Power Book III: Raising Kanan. This was going to be a special night to usher in two actors, Issac Keys and Gabrielle Ryan that would take center space in the Power Starz TV universe.
Actor Isaac Keys referenced the classic Tommy eyebrow raise that Joseph Sikora has made his signature over the past years playing the character. That was a fun moment and turning point for Isaac that helped him conceptuplize that he is in fact apart of the Power Starz Universe. With his character Isaac plays a ex-con who was once the head of the CBI, Corner Boys Incorporated, crime syndicate that controls the underground of the Chicago streets. We start there where he is let out of prison and slinks back into his old ways but with a more refined vision. Actor Kris D. Lofton plays his brother in the show and there is obviously brotherly love between them but a tension that builds. Who is the true leader of CBI? That storyline plays out throughout the series. There chemistry on screen is strong and you feel enticed to see how it all plays out. Actress Gabrielle Ryan tells us that the immediate moment she learned she booked the role she almost didn't believe it. She had called up her mom cry who mistakenly thought she didn't book the role when in fact SHE DID.. Actress Gabrielle plays Gloria, a sultry Chicagian who herself has to be entrenched with th underbelly of Chicago when she has to pay a fee to keep her bar afloat. Gloria comes across Tommy and they immediately hit off, going back and forth about pepper pot soup which isn't the only hot soup on the stove. Their tryst seems special when two heartbroken people find each other in an intimate moment. Gabrielle Ryan and Joseph Sikora are to good on screen, in our eipsode 1 review we discuss how this feels like a callback to noir romance films that embroiled crime, intrigue, and a fun tug & pull dynamic between co-stars. Her character Gloria also happens to have a an ex-lover who is the new nemesis of Tommy, making for more of. a spicy season ahead.  You can see Power Book IV: Force every Sunday on STARZ and on the STARZ app on your smart tv. And continue following Young Bold And Regal for the latest in entertainment.
Email Post
Labels: televison