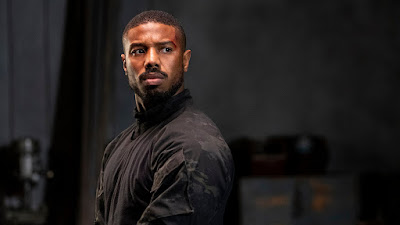 Actor Michael B. Jordan takes on the title role in "Tom Clancy's Without Remorse" and he absolutely delivers as the revenge seeking serviceman who uses his tactile skills to the nth degree to find some semblance of justice and finds himself embarking on a new purpose. The film opens up with a seedy mission by a team of Navy Seals with Michael B. Jordan's character at the center of it. Along with notable actress Jody Turner Smith Karen Greer playing his trusted friend also within the ranks. There is some confusion on what exactly the mission indicates only for John Clark to be duped at the end and a sense of regret once the mission is complete. The element of having this mission be related to Russian and Russian intelligence is interesting and makes this thriller even more timely. As the real world consequences see the U.S. - relationship heat up to a level of a Cold War like situation. The themes of mistrust of government, lack of transparency from officials, and how one copes with grief reign heavy in this film. All these themes are permeated through our culture today and it makes this film even more intriguing.
The warm performance of Actress Lauren London as Pam Kelly, John Clark's wife, makes the pain of her loss hit even more. We don't get enough of her to get an emotional attachment but the warmness and genuine nature of Lauren London in this role draws you in. Michael B. Jordan as Jordan Clark in this film is rough and tumble tactile one man wrecking crew but he has huge soft spot for family. As we find out Pam Kelly is pregnant. The eery angst of the mission overseas that John Clark felt uneasy about definitely came back to haunt him. As the Russian intel did a personal strike on his home, killing his pregnant wife in cold blood and nearly ending him with several bullets in his chest. One Russian operative gets away, leaving John Clark screaming for his wife who had been murdered. 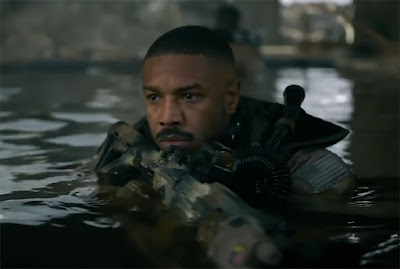 Jodi Turner Smith plays the the rock of a best friend who holds down John Clark, giving him classified intel to having his back in these classic combat fights where they are barricaded in a hotel. Piecing together the information this is when Michael B. Jordan has an even steelier focus to his mission to avenge his wife and unborn child's death. Using such tactics as misdirection, his Navy Seals training and pure will. I love that he didn't seem impervious to the forces up him: he wasn't paraded as a superhero with bullets bouncing off him or nearly missed simply because he's the protagonist. He got hurt hurt!! When he tells Jody Turner Smith character that he's got this, he'll divert an entire police department in order for his operative team to seek cover and escape that was valiant and so awesome to see. He struggled, he thought his way out of, and he succeeded in fending off that police department. And that was only one segment!! There are multiple action scenes where Michael B. Jordan stretches the limit of his character's will making it all more interesting.

In the Without Remorse Press Conference Jody Turner Smith talks about the platonic love her character and John Clark have, which she called "the purest love of all". She feels his pain and wants to spare him but his rage is so concentrated that it actually benefits in taking down an inner workings of a secret project that was planned out by Guy Pearce's character, Secretary Clay. As Karen Greer, John Clark finds a confidant he can rely on and equally deliver when it comes to blows towards the enemies.
In the final scenes you see the plan unravel as Secretary Clay wanted to make a mess of the situation between U.S. and U.S.S.S.R. claiming the only way the United States can make a big splash on the scene of the world is to have a worthy enemy that'll provide a knock down drag 'em out fight with. Finally getting the truth, Michael B. Jordan plunges the SUV into the river and forcing the Secretary to "Say Her Name" saying this several times you can't help but to think of the Black women's lives lost at the hands of the police department and the #SayHerName campaign which encourages those to focus on justice and real answers for their families who have to live with that pain. John Clark is simply a fictional character but even he felt tricked by a government he dedicated his life towards. A pawn in the system but towards the end of this film he is a power player working behind the scenes. It leaves room for a sequel and expanding the Tom Clancy's John Clark cinematic universe. Michael B. Jordan in this emotional rollercoaster of a spy thriller further solidifies his star power as an action powerhouse. And leads the way for anther notable franchise for him to helm and thrive in. See "Tom Clancy's Without Remorse" tomorrow, April 30th on Amazon Prime.
2nd photo courtesy of: Screengrab of "Without Remorse" YouTube Trailer
3rd photos courtesy of: JODIE TURNER-SMITH AND MICHAEL B. JORDAN STAR IN WITHOUT REMORSE PHOTO: NADJA KLIER © 2020 PARAMOUNT PICTURES
Email Post