Back To The Future With The 9inetys 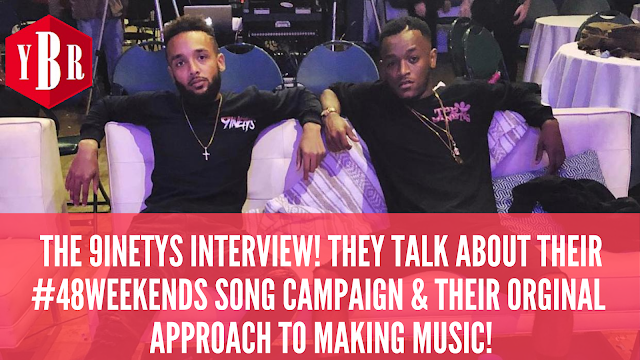 written by Evan L. Jackson
The 9inetys -the musical duo comprising of Bizzo & Rx- have a deep reverence for women. Not only for women in their own lives personally but women all over. Their music is dedicated to them and predicated on the actual realities of women's lives. Such as their song '2 Benz' is about a women saving up money on her own independently. Their genreless music catalog was already impressive with a loyal fan base. But it became even more prolific once they started their #48Weekends song campaign. A song released every week of 2020. WOW! That reminds me of the Kanye West "G.O.O.D. Friday" series or when H.E.R. was introduced to us and we anticipated her music. They've created a warranted buzz around their artistry with visualizers to their songs that feature Jordyn Woods, Lori Harvey, and even a woman gleefully skating in the summer daze of a summer day. Speaking with them more I get to the essence of their passion. Bizzo is a new father and I mentioned to him  how dope it was that he put the mother of his child & girlfriend Ericka Tucker in the video. Rx as well, had his girlfriend, Sascha Divine in the music video. They opt for a transparency within their music and the visuals they show the audience because they get to the real. Even choosing a music video director for "One Time" that stylistically made Bizzo and Rx look like Will and Martin fresh off the set of "Bad Boys" in the middle of the scenic Las Vegas desert. And yes, that was the point. They are very purposeful and very forward thinking. Their aforementioned name 'The 9inetys' isn't a trend its a way of life for them. Harkening back to the 1990s where a lot of the artists today get their influence from. Looking to the future these two are going to be successful because of their work ethic and their originality. Take a look at our interview with them below.
Email Post