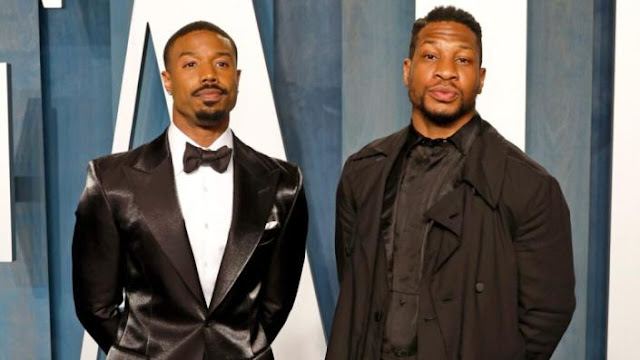 written by Evan L. Jackson
A-List actor Micheal B. Jordan and his charismatic 'Creed III' co-star Jonathan Majors arrived at the
Critics Choice: Celebration of Black Cinema & Television Awards at the Fairmont Plaza in Century City. Creed III, the third installment of the "Creed" franchise, is set to be in theaters March 3rd, 2023, by Warner Bros. Michael B. Jordan is set to make his directorial debut with the film. Tessa Thompson will reprise her role opposite Michael B. Jordan. The story fast forwards to present day with a very successful Adonis Creed who's boxing accomplishments lead him to be an icon among the people and a trawling empire. All of this is disrupted with a ghost from the past, played by Jonathan Majors, a fellow juvenile when Adonis was in an institution for troubled youth boys. He soon learns that his childhood friend will be soon to be turned enemy in and outside the ring. Ding ding! This seems to be a very interesting conclusion to the Creed franchise. Check out them arriving at the award show in style below.
Email Post