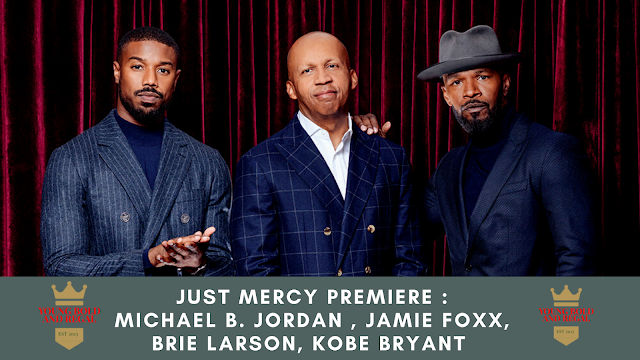 At the Crenshaw Baldwin Hills Cinemark Theaters Actor Jamie Foxx, Michael B. Jordan And Brie Larson in attendance for the critically acclaim film premiere of Just Mercy’. Based on the book written by Social Justice Lawyer Bryan Stevenson who is the creator of the Equal Justice Initiative an advocate who’s work provides legal representation for those unlawfully imprisoned and too poor to have good representation, with Supreme Court cases he has overturned Death Row convictions as evidence brought forth to prove his clients innocence. Often times those are Black Men who are presumed guilty before they even get a chance to prove their innocence .  Actor Michael B. Jordan plays the real life lawyer and advocate Bryan Stevenson.

So profound that Kobe Bryant  spoke with the crowd about the importance of this film. And a thank you the Host for the evening Terrence J opening up the night. Jamie Foxx about how you can do everything right and then your life can be turned upside down by a wrongful conviction. Actor // Producer of the film Michael B. Jordan  was stoic and a Leader among leaders in his performance, Brie Larson continues to be one of my favorite Actors because of the heart ❤️ she shows through her portrayals. And WOW, Jamie Foxx performance will simultaneously break your heart 💔 and give you Hope. 🙏🏾


A big thank you to @KobeBryant and @TerrenceJ who joined the cast of #JustMercy for a very special screening of the film @Cinemark Baldwin Hills. Check out the exclusive pics! See it now in LA & NYC, everywhere January 10. Get tickets. #LinkInBio
A post shared by Just Mercy (@justmercyfilm) on Jan 7, 2020 at 6:59pm PST


Add supporting the film #JustMercy 🎬 on your "to do" list. As a woman born in the south ( with a sister that lives in Alabama now) It's crazy that this story could really be told in present day if it were not based on a real life . MOVING performances all around!! Thank you Bryan Stevenson @eji_org for sharing your work and life for the world.🙌🏽 #JustMercy [ video @youngboldandregal]
A post shared by Elise Neal | Actress (@eliseneal) on Jan 7, 2020 at 4:56pm PST