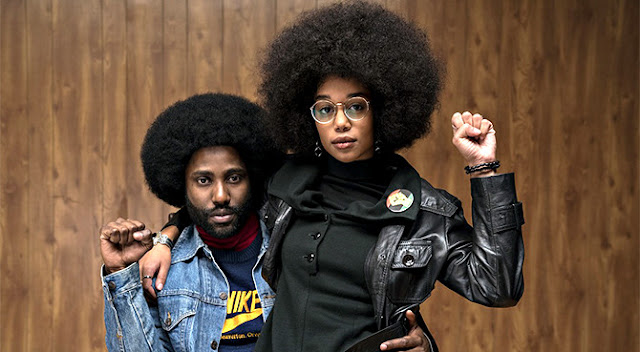 Saying a Spike Lee Joint is "timely" may be redundant but it couldn't be any more true with his latest film 'BlacKkKlansman'. Based off the true story of African American Police Detective Ron Stallworth who went undercover at the Colorado Police Department to infiltrate the Ku Klux Klan. Serving as only the voice behind the telephone, with his detective partner being the "Ron Stallworth" who showed up to the meetings. An obvious serious story that's deeply rooted in racism, politics, justice, and identity Spike Lee masterfully directs this film the only way he can. With just a tinge of satirical nature which is his usual style, he hones in on what this true story can mean for us today. Adam Driver is many of us in this film, coming to terms with his own Jewish heritage and how racism affects you even if you don't identify with your own. Actor John David Washington gives a sobering performance which serves the film well and dives deep into what it means to be Black and an authoritarian figure. Spike Lee Joints are always near and dear to my heart because they reflected the times and peaked into the future. His films are alternate universes that come to light in the real world. As scary as that is the hope he gives at the end of this film is that hate always loses when you laugh in the face of it especially when you stop it in its tracks. 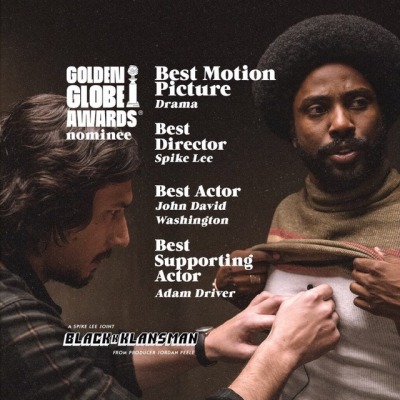 Spike Lee creates his own world and once you step in it he reveals the truths many are afraid to speak of but that's what make his film so special. The truth about this film is the vitriol of hate groups are still present. Looking back  throughout the film there are clear links to Donald Trump and a coy  or how you take it a crude reference to O.J. Simpson. Steeped in recent history when Harry Belafonte is on screen with eager young woke minds huddled around him it's the one of the most gripping scenes of the entire film. Utilizing historical figures and placing them iconic scenes is what Spike Lee does best. What's more interesting is they aren't just used to draw the audience in; as Harry told a horrendous story about a hate crime committed against THE Emit Till the ongoing intensity of the film was heightened. Spike Lee Joints evoke that visceral feeling and when you step into his mind frame for a film it's all too real. 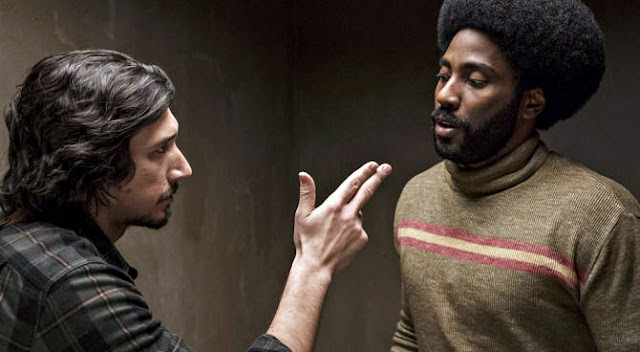 Actor John David Washington & Actor Adam Driver's chemistry plays like a 1970's buddy cop all grit-no bullshit detective drama TV series. Both characters revealing insight on each other serves as a mirror. Ron Stallworth in the film pushes his partner to not only take his role as an officer of justice to the edge but helps his partner comes to term with his own Jewish Heritage. In seemingly quiet scene Ron asks his partner why the Jewish epitaphs spewed doesn't bother him. Simply saying he doesn't identify with being Jewish, Ron's retort is the erasure and degradation of your people's heritage starts with you denying it. And allowing other to shape that narrative through scare tactics and propaganda is a dangerous path. Adam Driver steps into this role so brilliantly, evolving from a state of  "I'm just doing my job here" to "Let's catch these racist fools" is a testament to his acting. To join in on the cause against hate, to have an ally, as Ron Stallworth did in real life was just as incredible.

Actor John David Washington, son of famed Denzel Washington, plays mostly reserved in this role. Stoic and yet conflicted in his own woke mind on what it means to be a detective, a precieved enemy of the people, and attracted to the activism of his fellow Black brothers and sisters. A victim of his own police department when it come to harassment the frustration comes out to how to change the system from the inside out. Instead of an overly emotional performance that could of worked, John's confidence in coolly playing a real life figure brings a calmness among the chaotic. Laura Harrier who plays woke bae and more importantly is Ron's window into the other side of the matter. That tug of war with identity politics: Can you be down for the cause & be a good cop at the same time? It may look as two opposing mindsets but this film brings it in the middle. To be highly conscious of the racial issues in your community and offer a great solution & be an officer of justice is two sides of the same coin. You can help your people by doing your job and utilizing your platform to stomp out oppression. You easily could of played the theme to Shaft when Ron Stallworth enters the KKK meeting escorting Klan Leader David Duke. That's why John David Washington got his recent Golden Globe nomination, in a such a high octane plot line his cool as a cucumber performance with answers to the character's identity crisis comes off so convincingly.

Spike Lee has delivered a film that calls on today while taking a look at the past. What better way to hark on the feelings of those seeking to speak on racial issues without stepping on their mindsets. Through the art of film he encapsulates different perspectives so well. The driving force of BlackKklansman is yes, this is America. This is exactly the United States you live in that still has hate groups but this is the same America that has those who will oppose and end those hateful activities. The hope is you will be a vigilant enough to know the truth. And better yet use your platform to say your own truth. 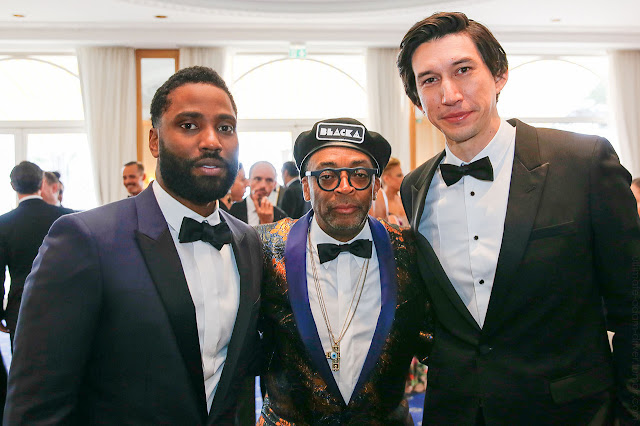