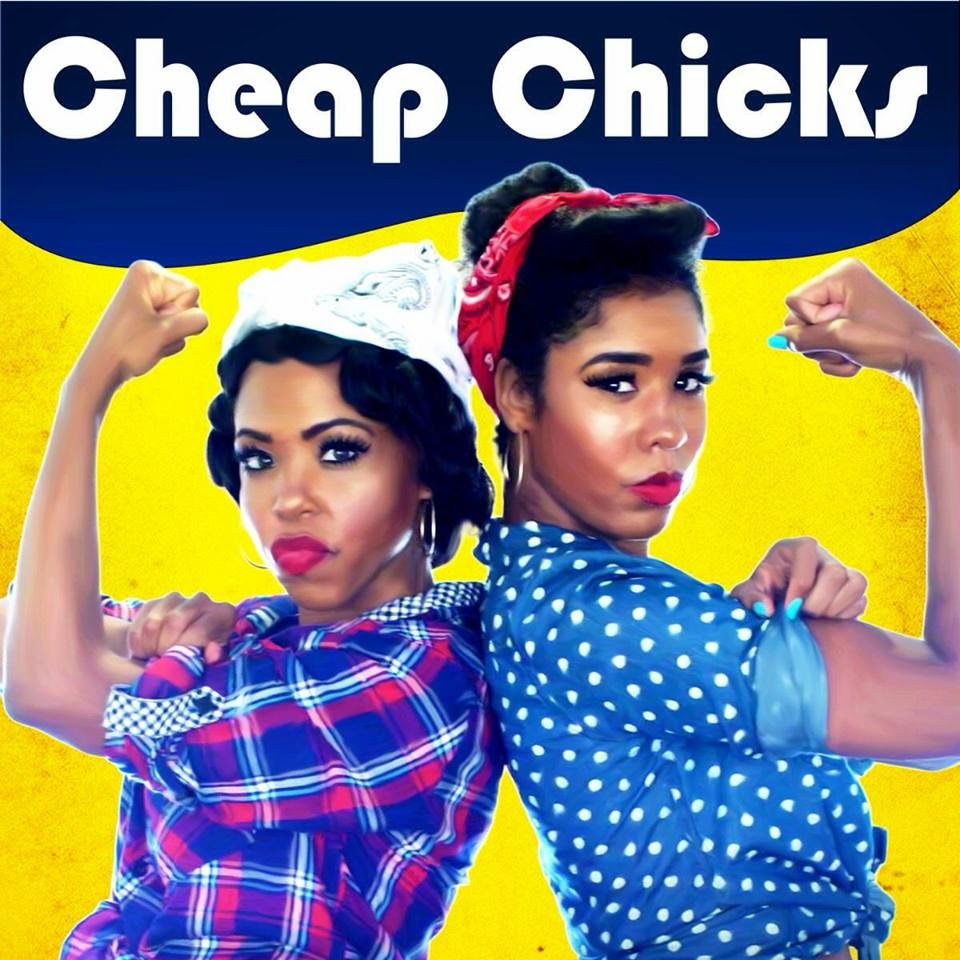 The chemistry between KJ Smith and Victoria Sanders, co- creators and co-stars of the show Cheap Chicks was apparent the first time I talked to them. Even if these two didn't create a show together they would be the best of friends going on adventures. Think of them as a modern day Lucy & Ethel and we're just along for the ride. On Cheap Chicks, appearing on Black&Sexy.TV, KJ and Victoria give money saving tips for the everyday person on a budget.  KJ Smith is an actor who has appeared in several TV shows and Victoria is a style blogger & a stylist to the stars. KJ and Victoria have a synergy that goes unmatched and a clear vision ahead of them that will have us anticipating more of their work for years to come.

How did you and Victoria meet?
KJ: We met through mutual friends. They all told me “You’re going to love her” and I did! Victoria styled my first editorial.

What interests do you share and which set you apart and allow each other to coexist in the creative space you two have built upon?
KJ: That is our friendship in a nutshell. We are similar on the surface level, but we are different in many other aspects. She provides a good balance to me though. All the things that I’m lacking she’s very strong in.

Victoria: When it comes to ambition, success, and core values we are on the same page. The differences between KJ and I give a good contrast which in turn creates balance. We both provide what each other lack. That’s one of the main reasons why KJ and I work so well together.

The Cheap Chicks series seems to be influenced by the retro looks of the 1950s, how did this come about?
KJ & Victoria: Girl Power!

Victoria: We love that era with I Love Lucy and the 1950s. That was at time where women were not only filling the role of homemaker but leaving the household and becoming breadwinners for their families.

In an episode Babes on A Budget you two head to the beach to share some money saving tips. How fun is it to film this series?
KJ: Coming up with the ideas are always fun. Everything leading up to the day of shooting can be hectic because we both have careers. Once we start shooting it gets really fun. It’s something we created together and the fact that I do it with my best friend is amazing.

Victoria: Who wouldn’t want to have a fun time creating something they believe in with their best friend? We realize that both of us have lives to live and careers we want to excel in but it feels less like work when you are with your best friend.

Why is it crucial moving forward that more African American women become content creators, show runners, and writers such as yourselves?
KJ:  It is important for everyone to create. We are designed in the image of God; he’s a creator, so we should create. Plus nobody wants to work for somebody for the rest of their lives.

Victoria: Nope! Not me, I do not want to work for someone for the rest of my life. That is why KJ and I both in our careers and in creating Cheap Chicks are building for the future so we can be our own bosses.

KJ: We are leaders! For example Shonda Rhimes is killing it right now with her thee shows on ABC. We want to be an inspiration to women, especially black women.

How do you find the balance of doing Cheap Chicks as well as focusing on your individual careers?
KJ: It is very hard to commit to because Victoria and I have separate passions outside of Cheap Chicks. I would be on call to book a role and would have to be ready at a moment’s notice. But the cool thing is when working with your best friend you find a way to get it done.

Victoria: Like KJ said, we understand each other’s schedule and we find a way to make it work. I would also be on call and would have to be booked for a set on short notice.

What do you see for the future of Cheap Chicks and for yourselves individually?
KJ: As for the future of Cheap Chicks we want to see it on every billboard and every platform as possible. We want to make appearances at seminars and workshops. Eventually we would also love to branch out into Television. The great part of it is that we are patient. We understand what it takes to be successful in this business.  Individually I just want to be an inspiration to people as a person and in my career as an actor. I want to have an established body of work like a Meryl Streep.

Victoria: Individually, like KJ said, I want to be an inspiration. I blog and I style and I want to be recognized as one of the best stylists in the industry like a Rachel Zoe or June Ambrose. I want to build an empire and create my own clothing line.

Where can people reach you?
KJ & Victoria: People can reach out to Cheap Chicks on Instagram: CheapChicks and Twitter: @Cheap__Chicks