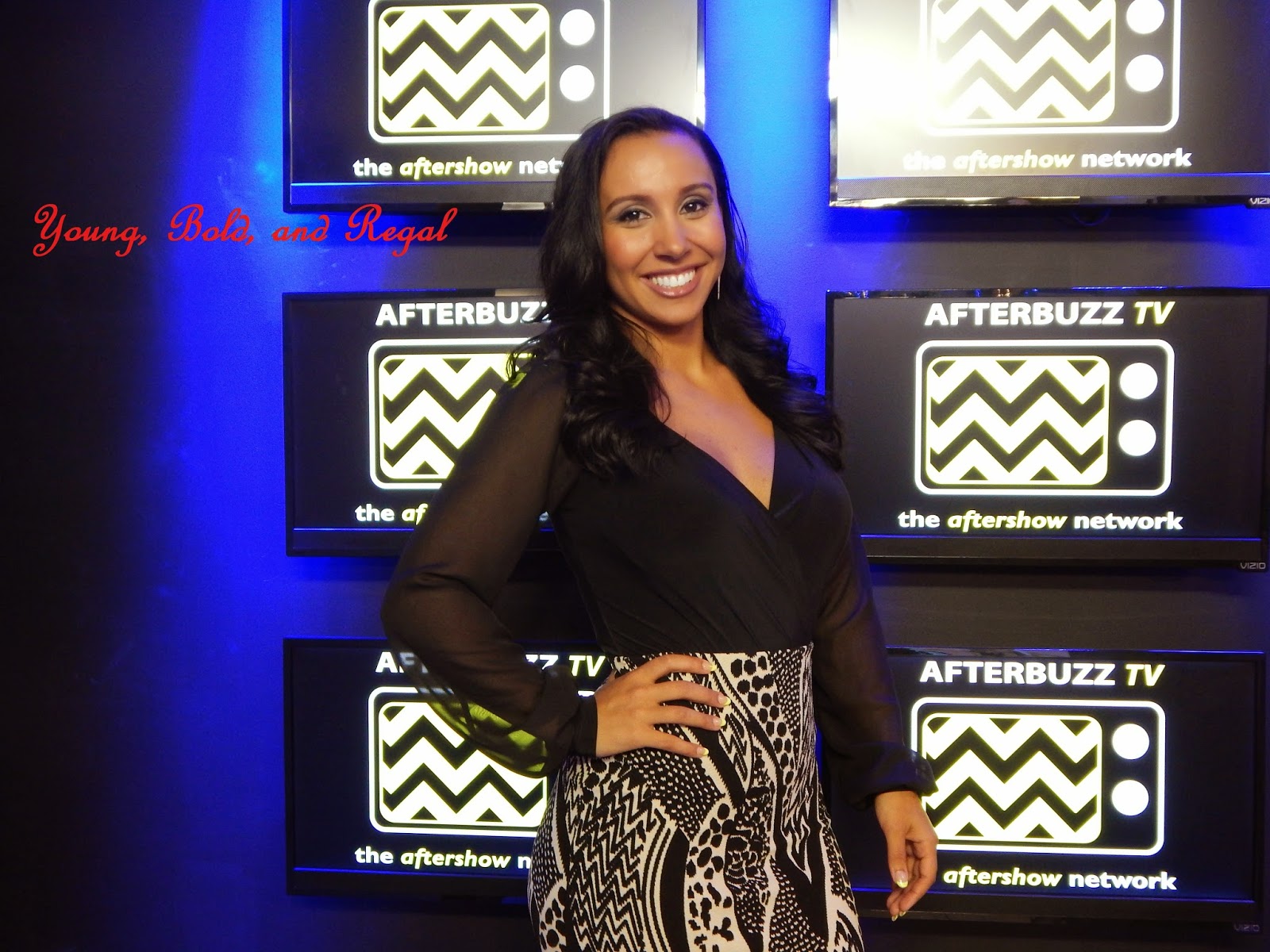 I was sitting down in the AfterBuzz TV studios listening and watching celebrity fitness reporter Fallon Mercedes give her take on the latest episode of the Biggest Loser. I noticed immediately that she was a natural in front of the screen. Her energy is fun and her warm personality instantly pulls you in. Fallon Mercedes is a certified trainer and a celebrity fitness reporter residing in Los Angeles, California. As the correspondent for Necole Bitchie and host of several AfterBuzz TV shows she has built an extensive resume and eventually branched out to create her own brand, Fit With Fallon. On her site she reports on the latest fitness trends, gives exclusive interviews with celebrities and athletes about their fitness, and has tips on how to eat healthy. Try to keep up and stay fit with Fallon.

What inspired you to combine your love of fitness with your passion for reporting?

I wasn’t getting as much work as I wanted as an entertainment reporter. My mentor, who is also one of my best friends, Necole Bitchie, suggested that I find something that makes me stand out from the rest. I knew I was passionate about fitness, I’m a certified trainer, and I was always asked fitness questions. I’m also an entertainment reporter and people would ask “What do these celebrities eat? What do they do to look so good?”. It’s something that nobody is doing, the fitness world is so big and so is the entertainment world. I found myself saying, how come there’s not an outlet that focuses on that. I think it’s a great way to dive into a celebrity’s life in a positive way. The celebrities are more open to it too, because they know I won’t ask them who they are dating or attempt to throw them under the bus.

What was the transition like from being a news anchor covering hard news to eventually cover entertainment?

My first reporter gig in LA was a big one, right when I moved here, i met the producer of Extra and he asked for my news reel. Later on that week I was on a major red carpet interviewing celebrities for Extra! But after that it was hard finding gigs so I had to hustle my ass off. So I bought my own camera; I already learned how to edit in college and I knew how to shoot. I started going to red carpets getting my name on the list. I would do interviews and call up outlets. I would say “Hey, I have an interview that says this” then shoot it over to them and they would pay for it. I had to be a one woman band. While others had a camera man or working a hired gig I had that mentality of doing everything literally on my own. That’s when BlackTree TV was calling me to do interviews and that’s where I had gotten in touch with Necole. She only had NY correspondents so I landed the role as her LA correspondent.

What influenced you to branch off to create your own brand Fit With Fallon?

I started my own site and wasn't getting much traffic, so I pitched a collaboration to Necole to be a fitness correspondent and she liked the idea. I knew Necole Bitichie would be a good platform for my fitness videos. I would approach celebrities saying I’m a correspondent for Necole Bitchie would you do this interview if it appeared on her site as well, and they agreed to it.

I grew up in a household where my father had a lot of businesses so I get that entrepreneurial spirit from him. It feels good to have something and a certain pride in it. This is something I started on my own, that I’m doing on my own, and there is a beauty in seeing growth in something that you built. I love to nurture things, so to be able to nurture my own business feels amazing and I know one day it’s going to blossom into something great. I started the blog and it was doing well with over 50,000 hits within in three months. Then I got a full time job and stopped blogging. Sometimes when you are working full time it kills that creativity because you’re so busy. At one point I had to  fly home because my father had become ill. That was a wake up call for me as well because I had gained 20 pounds and decided when I get back that I would focus more on my fitness. A week later, after I got back I had gotten fired from my job. I was upset at first, and then I thought this was a blessing in disguise. I knew I needed to do what I loved. I started working out and within in two to three months I lost the weight I had gained, started to cover all these fun classes, and began doing interviews again. I felt physically, emotionally, spiritually, and mentally in such a better place. Now my dad is feeling better.

On your YouTube Page Fit With Fallon TV you showcase activities that are good workouts. What is the most fun you’ve had with an activity so far and which activity are you looking forward to featuring next?

I recently went on a trip to Catalina Island off the coast of California and went on a zip line. That was fun as well as doing Antigravity Yoga at the Crunch gym in Burbank that I featured on Fit With Fallon TV. I am looking forward to posting my recent interview with an Acupuncturist; he did a method called accuweightloss on me which is pretty cool. They stick needles in certain places in your body that are actually trigger points for hunger and stress, and help you stop eating as much so you can lose weight. I thought it was awesome; it didn't hurt as much as I thought it would, and I believe my audience will be excited to learn and see new types of approaches to health.

Why is it important for you to keep up with fitness?

I see it as a sense of personal therapy for me whenever I go to the gym. It is a great outlet for me to get away.

How tempting is it to break away from a diet plan and indulge in some of your favorite food?

I have no discipline! A lot of is portion control. If I’m craving something sweet I’ll make a protein shake along with peanut butter and a banana so I get that craving out of the way. I’m not as disciplined as people would think. For the most part it’s about balance.

What are some of your favorite meals to make?

I make this spicy sweet salmon and I cook it in a way that it’s not too many calories but it really hits your taste buds. I’ll cook the salmon, then season it, add red pepper flakes, put green apples, brown sugar and it all caramelizes.  I’ll have that with sweet potato and a nice kale salad. Everybody I make it for say it’s amazing. I also like making stuffed green apples. You decore the apple put in oatmeal, applesauce, cranberries, walnuts, dates,  cinnamon, and vanilla extract  place it in the oven for 25 minutes. It’s so warm and so many different tastes. I find it as a healthy substitution for apple pie.

Who has been one of your most favorite people you’ve interviewed?

My favorite person to interview so far has been Devon Franklin. He talked about being spiritually fit and mindfully fit. In the US we don’t do enough exploring different avenues of health. You think it’s just nutrition and just working out but there are a lot of people whose minds aren’t healthy. You control and discipline you’re eating habits, you control and discipline your body through physically working out, but you’re letting your mind be stressed and have negative thoughts. That was the first time I stepped out of the box in terms of fitness interviews. Another favorite person I interviewed was Common. Usually when I interview someone I have to make them feel comfortable, but with both of them I felt relaxed. The person I would most like to interview is Oprah. Not only because she’s a great entrepreneur and host, but in terms of fitness. We’ve seen her over the years yo-yo diet. This woman with all this money, all this power, and even she has issues with controlling her weight. I’d love to talk to her about her experiences with that and ask her when she finally got comfortable in her own skin.

What are some of your favorite workouts to do?

I just love doing things that are crazy. Like the Antgravity Yoga, I like doing boot camps, beach workouts, and especially workouts that involve scenery. Anything involving competition I love to do as well. I don’t prefer working out alone, I love feeling the energy in the room and motivating other people and people motivating me. I did my United We Sweat event recently and it was so much fun. I’m going to start doing Fit With Fallon meet ups. The videos that I do, I’m going to try to do a meet up where the girls can meet me and do the same exercise.

I definitely want to have my own fitness TV show and after that I want my own fitness talk show. There’s no show that focuses specifically on fitness. I want to be the first fitness talk show. I want to do what I’m doing already, interviewing athletes and celebrities about their health and fitness regiments and talk about personal stories. I can have a portion of my studio that has a kitchen to show you how to cook healthy food. Then another portion of the studio that has a gym to show you a couple workouts and I think it would be fun.